We offer grants of up to £2,500 for individuals, groups and organisations to support research into the history, architecture and archaeology of Oxfordshire (including the city of Oxford). Grants are given both for original research and/or the publication and dissemination of research. 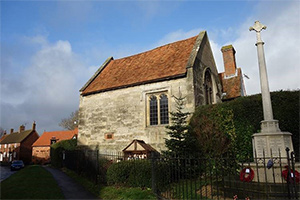 Situated on Chapel Square in East Hendred, Champs Chapel is a three-bay building, with large east window lighting a full-height bay, and a floor in the western two bays, jettied over a screen. The floor structure is elaborately moulded, and the principal rafter roof has clasped purlins, curved wind braces, and an arch-braced truss over the upper room.

A grant from the OAHS was used to finance dendrochronology dating of several timbers at the chapel. Three different timbers produced dates between 1464 and 1466, giving a likely construction date of 1466. This proves that the chapel was built by then Lords of the Manor, Sheen Priory, but dates the chapel later than had generally been thought.

OAHS is a long-term supporter of the project, which aims to complete coverage of the whole historic county. Annual grants have usually been £2,000.

A 7th century garnet and gold brooch was discovered at West Hanney in 2009. A grant of £100 assisted with the conservation of the piece, which is now on display in the museum at Woodstock.

Dorchester-on-Thames has seen settlements dating from the late Iron Age (100 BC - AD 43), the Roman, and the Anglo-Saxon periods which have not been obscured by later development. Since 2007 a partnership of the School of Archaeology at the University of Oxford, Oxford Archaeology, and members of the local community, have been investigating these sites, forming the long-term 'Discovering Dorchester' research project. OAHS gave a grant of £1,000 to this initiative.

The Vale and Ridgeway Project: Excavations at Marcham/Frilford

The Iron Age and Roman site at Marcham/Frilford was the focus of a long term excavation project in the early 21st century. As well as providing training for undergraduates at the University of Oxford and students from Continuing Education, there was as strong community element. OAHS supported the project with a grant of £500.

The Historic Towns Trust is producing a series of Historic Towns Atlases, with the next volume covering Oxford. OAHS made a grant of £2,000 towards the illustrations for the volume.

The Oxfordshire Museum Service developed a new gallery in the Woodstock Museum displaying and interpreting many of the splendid finds from the Anglo-Saxon period which have been made in the county. OAHS supported this project with a grant of £2,000.

The Chipping Norton Project commissioned a geophysical survey of the castle area of the town. OAHS provided a grant of £500.